Are you a passionate leader who is ready to drive the path to excellent customer service?

Do you possess excellent time management, follow through and organizational skills?

Do you love empowering successful teams and desire continuous improvement?

If you answered “yes” to these questions, we want to hear from you.

Our ideal candidate is a seasoned customer support professional with an ability to motivate and inspire others to get things accomplished. The candidate will act and work in a manner that is consistent with the company’s core values. We are seeking someone with supervisory experience, who understands systems, has the ability to multi-task, possess a strong work ethic, enjoys problem solving and analytical thinking. This individual will believe in data and are passionate about technologies ability to improve people’s lives.

Davis Instruments is an Equal Opportunity/Affirmative Action employer.  All qualified applicants will receive consideration for employment without regard to race, color, religion, sex, national origin, disability, or protected Veteran status.

When Hurricane Irma hit the Leeward Islands in September, 2017, as a Category 5 hurricane, most personal and government weather stations were quickly knocked out of service. But one, a Davis Vantage Pro2, withstood the onslaught and reported a high wind gust of 199 mph, the highest wind speed ever recorded by a personal weather station on the Weather Underground network, and the fifth highest wind speed ever reliably recorded. According to Weather Underground, the National Hurricane Center plans to mention the measurement in their final report on Irma.

The station, owned by Serge Brin, was mounted on a 21’ pole on a bluff on the north coast of St. Barthelemy, squarely in the path of the storm’s north-northeast winds. It survived the front eyewall of the storm and recorded the 199 mph gust.

The gust came amid sustained wind speeds of 106 mph. This data is backed up by NOAA readings from the island of Barbuda of 118 mph. The Barbuda station reported a high wind gust of 155 mph before it failed. Brin’s Davis Vantage Pro2 station reported a minimum pressure of 916 mb as the eye passed over, which exactly matched that recorded at St. Barts airport.

The Vantage Pro2 is designed to withstand extreme weather. Its anemometer has been wind-tunnel tested to 200 mph, but a hurricane is not a wind tunnel. (For one thing, there are no flying building parts to knock down a weather station in a wind-tunnel.) Surviving a hurricane of this magnitude is a testament to our commitment to making weather instruments that perform as well (or, in this case even better) as professional stations.

While the back eyewall of Irma destroyed Brin’s Vantage Pro2, it did not dampen Brin’s lifelong interest in extreme weather events. “I have been interested in hurricanes since I was ten — the passage of hurricanes David and Frederic in 1979, and in 1995, Luis, allowed me to see the power of destruction that could be generated by a powerful hurricane,” he told us.

“For my birthday February 6 [Happy Birthday, Serge!], I For my birthday, February 6 2000, I offered myself a Davis station, the Weather Monitor II that allowed me to taste my hobby,” he explained. For me, a passion must be shared with as many people as possible; this is what the Vantage Pro 2, a reliable and very well designed instrument, allows. My house is near the sea, she found herself among the waves causing water infiltration in the living room and bedroom. The roof has been impacted by debris from metal sheets and tree branches, the garden devastated by the waves and finally my car drowned by the swell. Storm tide rose to 12 feet.”

It’s a heart breaking reality that so many people in the Caribbean and Puerto Rico are still suffering from the effects of Irma. But like his neighbors, Serge’s optimism will help rebuild what was lost.
“My weather station will be rebuilt before the next hurricane season, even stronger than before!” he said.

Deputy Director of Ripley County EMA Richard Corkhum said, “This area could be susceptible to any of the severe weather [types, including] a tornado or flooding. With that in mind, that we could have a disaster or emergency that’s weather-related, we want to be on top of the situation that way we … 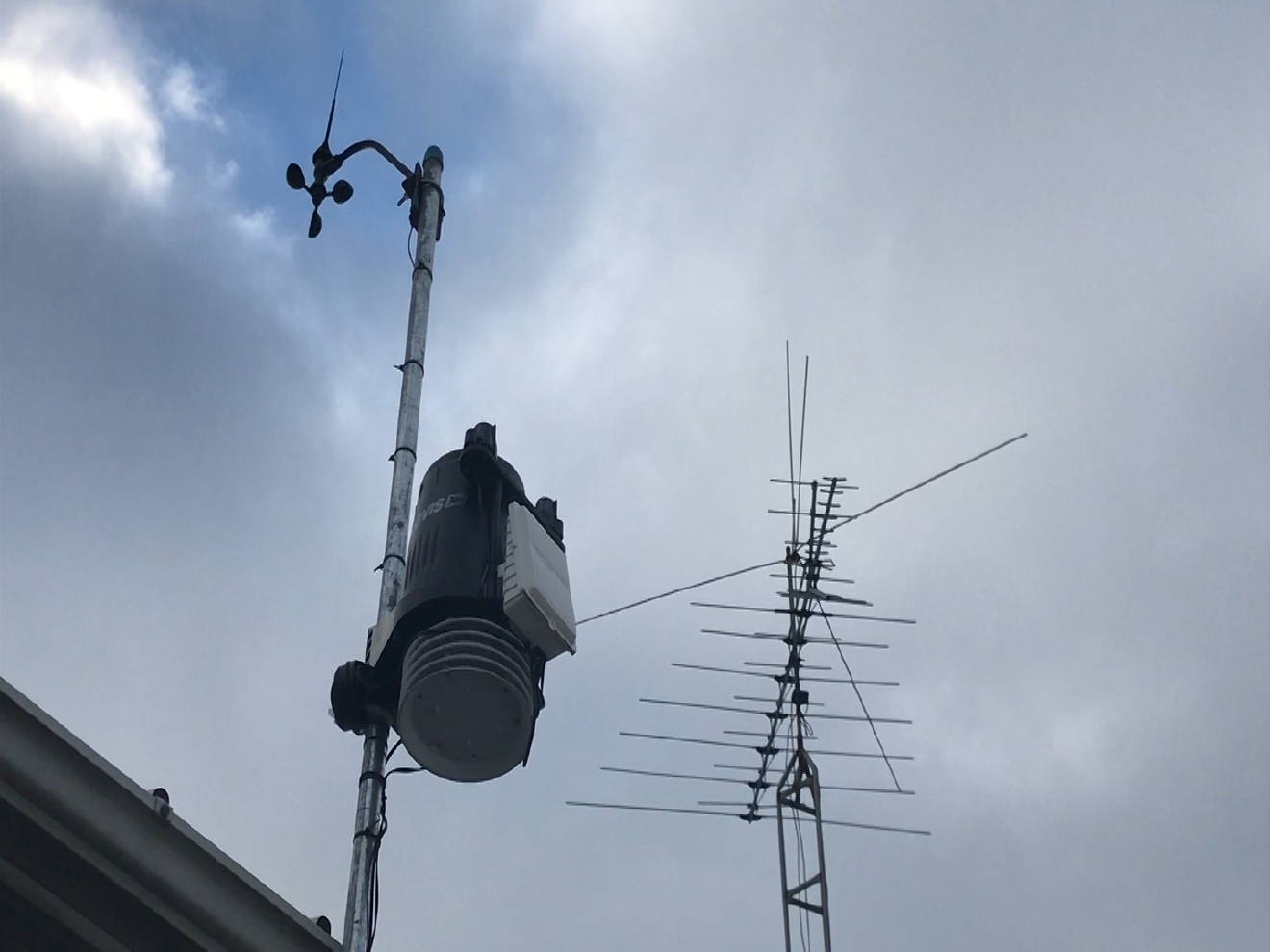 Bestadvisor.com (Feb 20, 2017)–With [a weather station] in your place, you’ll know exactly when it’s going to rain cats and dogs and when early frosts coming.

Are you looking for a quick comparison of personal weather stations? Look no further! Bestadvisor.com has done the work of creating…

Syracuse, New York (Jan 10, 2017)–Real-time weather data and a live look at the Syracuse University main campus are now available, thanks to a donation from WeatherSTEM. Ed Mansouri, Florida State University alumnus, is the creator of WeatherSTEM. His initial goal for this program was to provide weather stations to K-12 schools with science technology and engineering curricula, but now, many Atlantic Coast Conference universities, including Syracuse University, have received the system as a donation. Typically, the system retails at $5,000, with annual fees around $1,750. The University is the 12th ACC institution to receive the station.

The philosophy behind WeatherSTEM is that an educated public is a safer public. According to Mansouri, this weather station is a powerful tool that “provides an extensive suite of public safety features, including lightning alerts, severe weather alerts, wet bulb globe temperature forecasts, environmental cameras, agricultural monitoring, and more.” This new tool will allow for resiliency to emergency weather and improved…

Winfield, Alabama (Jan 20, 2017)–Winfield Elementary School looks like any other school but if you look up you’ll see a weather station on its roof. Cameras and sensors collect weather data then it goes online. The weather station was installed in December and is now being used by the entire district.

8th grader Andrew Stovall said, ” I can look at the radar on the weather stem app and determine if there’s any rain in the area or any warnings in the area so I can alert my followers.” Stovall has a passion for meteorology so he’s created a Twitter and Facebook page to send out information about the weather gathered by the weather station. “I can come here to look at the radar and I can take a picture or a snapshot of this and then post it to my…

(Jan 5, 2017)–What’s the best tool to grab when fingers are cold and wet, and a zipper won’t function? Better than a Swiss multifunction knife, Davis Instruments’ Snap Tool Multi-Key is a deck plate key with an attitude. It’s packed with features that anyone venturing outdoors will want on hand—or in a pocket.

Its button snapper and unsnapper are perfect for shrunken canvas or corroded snaps. The zipper puller tames even the stiffest and stickiest of zippers, and is perfect for when….

Not only is Branch Elementary School in Arroyo Grande now an important weather observation station for meteorologists throughout the Central Coast, but at the same time the school added a new learning tool to their excellent science program. The school’s science classroom is one of best I’ve ever seen. Seriously, their science lab rivals…

With fields, feedlots, and rangeland scattered over a 60-mile area centered around Albion, Nebraska, the effects of weather on the Niewohner Brothers operation can vary widely. “Particularly during the spring and fall, knowing if an area received rain or not has a big impact on scheduling fieldwork,” points out Matt Niewohner. “For example, today we’ll be cutting silage in one area, drilling rye in another location, and starting corn harvest in a different field. So just knowing the rainfall amounts definitely helps us coordinate fieldwork.”

Having access to field-level current weather information is also especially crucial to this operation since many of its acres are irrigated, and the land they farm can vary greatly from sand to clay soils. So scheduling irrigation according to soil-moisture levels…

Despite how critical too much or too little water is to corn and soybean production, it’s an input in precision agriculture that’s easy to get wrong on a particular field or part of a field. Ever more volatile weather patterns point to a combination of more on-farm weather stations, more rain gauges, more cooperative sharing of rainfall amounts with neighbors, and more use of modeled rainfall to get more accurate data.

It’s ironic that the most limiting input for successful crop production-—water-—is one of the most elusive to precisely measure on the farm. Precision ag tools can measure crop yields accurately (given good calibration) across a whole field as well as zero in on multiple points in that field. Yet, it’s often difficult for a farmer to say with certainty how much rain…